Exposing these 11 lies that sabotage your affair break up,
is really important if you’re going to get free of the affair. 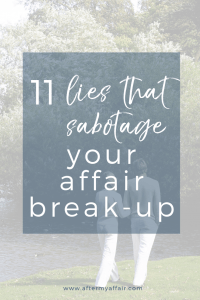 Read all the posts in this this series:

‘Breaking Up with Your Affair Partner’:

Many times we sabotage our life by believing lies from our inner critic,
and we often don’t even realize it.

This is just as true in this situation of sabotaging the break up with an affair partner.
Your brain is a powerful part of ending a relationship and it’s just trying to protect you from changes that
it deems as dangerous for your life.  But your brain doesn’t differentiate a good relationship or bad one, it just
knows there was pleasure of some kind with this person.

So, if you’re in an unhealthy relationship, or have an ungodly soul tie, it’s important to recognize the
following lies you might hear in your mind, so you can overcome these lies and end the relationship for good.

Do you recognize any of these lies in your head,
or have you said them out loud? 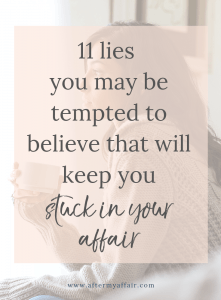 I’ve said every one of these myself.

If you’re a kind hearted person and maybe even got involved in the affair because you
saw a need he had and felt compassion, you’ll like feel guilty for ending it with him.
But compassion can be misplaced and ultimately ruin your life sometimes too.

This is one of those times.
Your affair started in your thoughts, and it’s your thoughts that will keep you in it if you’re not careful.


The 11 Big Lies That Sabotage Your Affair Break-Up:

You’ll reason with yourself, and possibly even your husband, that you just want to end it in person, that you ‘owe him that’
and any other way seems mean.

9. “Mailing a ‘breaking-up letter’, or just walking past him if I see him somewhere,
is just too harsh and impersonal.”

Watch this video of my video interview with my husband of his perspective of the infidelity 12 years ago.

10. “We need just one more special time together.”

Just one more failed attempt to break off the affair, which leads to just one more day of feeling terrible guilt and shame.
It’s not worth it, friend.

So, when you hear your affair partner suggest this, remember this post and tell him no.
It’s never just one.. just like I can’t eat JUST ONE Krispy Kreme donut. (I really tried though).

11. “I’ll end it, but I’m just going to keep one email open,
or not block him on my phone, social media or email…
just in case he ever needs to contact me.”

But it IS a big deal.

How willing and serious are you to get well?
Do you really mean business this time?
Or are you going to let any of these 11 lies sabotage your affair break up?

Remember, you will get past this terrible season in your life, but not if you can’t hanging onto
your affair partner, or keeping the affair going.

If I could do it-‘Ms Messed up and confused herself’- you can too!
I’m happier now then I ever thought I was during the affair.
Inner peace and joy in knowing I’m living a single-minded life, is something I wouldn’t trade for anything, or anyone.
I’ve lived the other way and it promised way more than it delivered.

Remember this:
You are strong, capable and worthy of experiencing a healed heart,
and a whole-hearted life, full of purpose and joy!

My unfaithful wife letter to you.

Why ending an affair is so hard.

Again, here’s the other posts for you,
‘Breaking Up with Your Affair Partner’ series: