What Is Microcheating?
11 signs of micro-cheating to recognize in yourself, or your spouse. 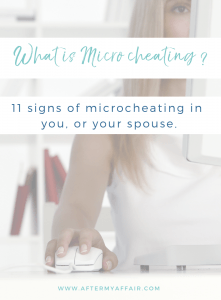 re appears to be a new ‘buzz word’ out,  It’s called “microcheating”.
Since it’s being thrown around a bit, I wanted to address what I’ve read about it, and my take on it all.

It’s not complicated, and it’s nothing new.   Are you hiding anything that you’re doing from your spouse?
Do you feel your spouse would be upset if they knew about the connection you have with another person?
Do you suspect your spouse of hiding a relationship from you, however innocent they say it is?
Then it’s microcheating.
Don’t let yourself be deceived if you’re doing these things yourself.
I think we sometimes feel like we’re being clever, with new words to lessen the blow.
Nobody likes says the word ‘adultery’ anymore. There may seem like there’s more “gray” areas these days with
social media and more availability to the opposite sex, but excessive interest is still an affair.

That interest can be emotional or physical.
I’ve always called them small compromises that we make, which eventually lead us into infidelity.

Do you relate to this?   Maybe you obsessively check his facebook page, and ‘like’ anything he posts (without looking creepy, of course).
Or, maybe you’ve sent more emails to each other than normal,
or you go out of your way to meet him in the break room when you know he’ll be there.
Innocent on the surface, but you know there’s more going on.

Ultimately, if you’re keeping any secrets,
then you’re ‘microcheating’.

A little history:  The term “microcheating” seems to have first began in 2004, but it really took off in
the public’s eye when Thought Catalogue posted an article on the ’33 signs your boyfriend is microcheating’, and it went viral.

So I put together a list of microcheating behaviors that I’d normally classify as ‘little compromises’,
or ‘classic warning signs of infidelity approaching’.
Also, note that this list of behaviors used to easily be classified under the emotional affair category.

Some I’ll give credit to being from the original Thought Catalogue post in 2018,
but many are from what I’ve said for years; and all warning signs you’re heading into an affair.

Signs you are, or your spouse is, micro-cheating.

For this article, I’ll post it in the third person, as many spouses are here looking for signs. But this list could
easily apply to you.  If it does, use it as a warning to turn back before getting caught in an affair.

Also, please note, many of these can also happen in someone who’s not cheating at all.

1. Guarding their phone a lot; it’s never far from their side.

2. They spend a lot of time on social media; especially ‘liking’ one persons posts the most.

3. There’s a lot of ‘inside jokes’ and playful banter with someone, other than their spouse.

4. Neglecting to mention, or talk about, their spouse.

5. Sharing their ‘great news’ with this other person, instead of their spouse.

6. Making more time for this other person for a talk, drink, dinner or something else they say is ‘innocent or necessary’.

7.  They’re thinking more about this person, bordering on obsessive thinking. ‘Where are they, what are they doing’ thought’s almost consume their minds.

8. There’s a lot more time ‘getting ready’ when they know this person will be there.  (losing weight, smelling good, new haircut etc..)

9. Manipulating circumstances or events to be with this other person more often.

10. They’re most likely not verbalizing it to anyone, or even to themselves, but they begin fantasizing with the idea of being unfaithful.

11. Other’s may recognize something’s  ‘off’ with these two.
Someone may even bring it up, which only makes them defensive, and usually declaring “we’re just friends.”

As these little steps of compromise progresses, they start to justify these behaviors within themselves.

Do you recognize yourself, or your spouse, in this list?
If it’s you, then stop now, and recognize how close you are to destruction.  The wise man see’s his/her path of destruction, and turns around.
If you see your spouse in this list, then confronting them when you have some more proof, will be wise.    I always suggest gathering more proof because
unfaithful people like to guard their lying.  (I know this, because I was one).

Did you see these other posts, similar to this one?

Reading the 4 stages of an affair might be really helpful.

18 reasons why not to have an affair.

When you’re tempted to have an affair

7 benefits to having an affair.