What are the 4 stages of an affair? 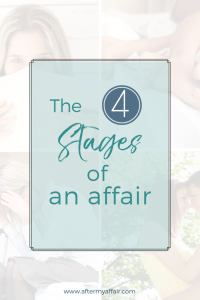 Why does knowing the 4 stages of an affair even matter?

Whether you’re the wife who was unfaithful, or the betrayed husband, learning about the normal four stages of an affair will help in the healing process.
You’ll recognize the signs and be able to navigate out of it easier.

The statistics show most affairs will take its course and will fizzle out eventually,
no matter how unique the affair partners think their relationship is.

So, after much research, counseling, and reading everything I could about affairs, I came to learn there are primarily 4 stages to most affairs.

The first phase, even before stage one of an affair, is the condition the marriage is in.
Even “good marriages” can be vulnerable to infidelity.

These are just examples that can cause a marriage to be vulnerable to an affair.

So, what are the most common compromises people make, at this first stage of an affair? 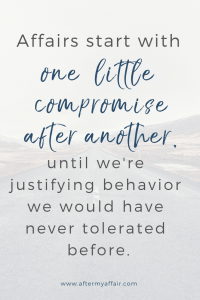 This is how a normally ‘good person’, who would have never imagined they were capable of having an affair before, eventually falls right into its trap.

When one of them announces their attraction (however innocently it’s cloaked), that is the point of no return.
If the other person is interested, they see the opportunity. The line is crossed, and an affair starts.
The announcement of their feelings, or the connection they feel, is almost always the gateway to starting an affair.

(I also denied anything was wrong to my close friend at the time, when she mentioned concern about what she was seeing with me.
My husband even had serious concerns, before anything actually happened.
I denied it, and said this man wasn’t my type (which he normally wouldn’t have been) but he was right, I was heading right into a disaster).

STAGE 2-  CROSSING THE LINE (the stage of secrecy)

What they don’t understand, is they’re basically on drugs, the drug within them literally, which is both dopamine and serotonin.

A little information on the chemical release in our brains.

Stage two progresses further and further into secrecy and lies,
creating a separate world for the affair partners.

This is a common progression at this stage of an affair:

This stage of the affair, where they are feeling “in-love” or the Limerence stage, usually lasts between 6 -18 months.
Yet, sometimes as long as 3 years, according to Denise Bartell, PhD, a psychologist at the University of Wisconsin, Green Bay.

“But the relationship and excitement of the affair eventually slow down, usually within 6-12 months”.

Just as will happen in any relationship, people settle into more of a routine and the early thrill of the chase wanes.
This is why it’s always better to work on the marriage,  than just trying to find another mate.

Every relationship has a natural cycle of highs and lows. We miss out on the joy and depths of mature love if we’re just chasing is that early excitement.

STAGE 3- ALL THE ELEMENTS OF AN ADDICTION & DISCOVERY DAY 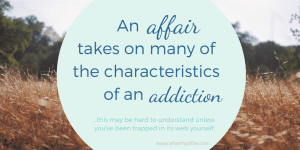 The affair takes on many of the same characteristics of an addiction.


Eventually, couples in an affair get sloppy about maintaining the secret.  An affair is either discovered or they confess.
Those are two entirely different Discovery Day’s, but the pain the betrayed spouse feels is still the same either way.

If you’re the unfaithful spouse and you continue in the affair, just know that it’ll only do greater damage to your spouse if they find out.
And they usually do eventually.   This only delays the recovery of your marriage.

Yet, if you can recognize that you’re living in a disconnected fantasy life with you affair partner,
and break free of the affair,  you’ll find healing much quicker.

STAGE 4: The stage when the affair has ended, or is fizzling out.

This takes a lot of prayer, support from outside help, and dedication to themselves to want a better life than the affair will end up giving them.

Some quick information on whether the affair partners would stay together if they eventually married:

If you’re the unfaithful wife and you want to be reconciled to your spouse, commit to:

The betrayed spouse also should be committed to the steps they need to take to heal and recover from the depth of pain they feel.

If you both do these things, you will slowly see your love for each other return.

I love that saying “feelings will eventually follow our decisions” because it’s so true.
Sometimes we have to take the steps of commitment to our spouse again, even if our feelings have waned.

In time, those feelings of love will return and trust also will grow as you keep doing the right things.

Rebuilding a marriage after an affair is a process of good days and bad days, but it can happen.  It happened in our marriage, although because of my delaying breaking off the affair, we almost didn’t make it.  But our marriage was eventually restored and healed.

To review, there are primarily 4 stages of an affair.

Feel free to contact me and tell me where you see yourself today within these stages, or what steps you recognize need
to be taken to heal after infidelity has hit your marriage.

I’d love to hear from you and pray for you. God does see you and loves you more than you can understand right now.
Whatever happens to your marriage, know that he wants redemption first of all for you.

Be sure to read my advice for the top 10 stages of healing after an affair.

If you’re still unsure about staying with your husband or leaving him for a life with your affair partner, read this post.