5 things not to do after your wife’s affair. 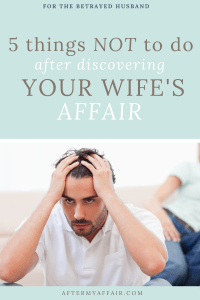 In the last blog post, we talked about the 5 things you SHOULD do,
and how to cope after you find out your wife was unfaithful, you can read it here.

You might wonder if she’s even telling you the truth NOW.  Is her affair really over?
Those are questions that need answering.  But in the meantime, there’s some important
things for you to know NOT to do now.

First remember,
You’re not alone. There are many husbands in your same position right now.

Although it’s more difficult finding information for betrayed husbands and
unfaithful wives.  It’s a reality that many couples are dealing with right now.

Second,
I can’t tell you to stay with your wife, or divorce her.  Nobody can decide that- but you.

I do know that a lot of people give up before they should.
Many marriages can be restored if they’re both willing to do the hard work in recovery.

I just can tell you our story, and that we did survive my affair and our marriage is restored and better than it was, even before the affair.
We appreciate each other so much more since we know we almost lost it.  So…it IS possible for marriages to get through this hard stuff and be better.
I’ll share some our personal stories in this post as an example.  You can read our marriage story here.

But I realize everyone’s situation is different.  What I do want to help you with, is what NOT to do after finding out about your wife’s infidelity.

We put together the top 5 things not to do, although there is honestly so many more.
These are the most important, in our opinion.  We wish we had someone telling us these things, and unfortunately
we learned the hard way, and it took much longer to heal.

You’re pretty vulnerable right now and susceptible to a lot of poor judgement, because you’re hurting so much.

Here are the top 5 Things NOT to do after finding out about your wife’s affair:

Sure, easy for me to say right? We all want to feel better, and in the short-term, it might help you forget a little. But it will eventually turn on you if you self-medicate in excess. I’m talking drinking alcohol, drugs, smoking pot etc…. You know whatever your vice is.

2. Don’t stalk her or the affair partner.

Sure, you could follow her to see if she’s lying about where she’s going. You might feel justified in doing so, and honestly I wouldn’t blame you.
But stalking, following, monitoring…will all just make YOU crazy in the end.

3. Don’t go injure or beat up the guy or slash his tires etc… you get the idea.

It won’t help you or your kids if you end up in jail.
Plus it will likely upset your wife further and drive her further away with sympathy for the other guy.  Not good.
You’ll not be any help to yourself or your kids or your job, if you get in trouble with the law right now.
Don’t complicate your life.

I’m not saying you’re not going to think it.  Trust me, my husband did too.

4. Be aware of your own vulnerability right now to an affair.

You might think “no way, I wouldn’t do that” but you are hurting and rejected right now. Prime situation for some kind of an affair.

I actually had a suspicion my husband was meeting somebody from work when he said he was going somewhere else (because he’s a terrible liar and I know him so well).
It was in the middle of all our stuff and he just wanted to ‘feel better’, so he started to confide in a long-term female friend/acquaintance from work.
I guess you could say they had an emotional affair (just talking and texting) for a few months before I confronted them in the park talking that night.

She was the type that preyed on guys like this. While talking with him, she was separated from her own husband and dating another! (yes, there really are women like that).
That whole situation just complicated our own recovery in some ways.  Later, and he felt dumb for confiding in her to begin with.

Although you might feel that’s the last thing on your mind, just be aware of the incredible temptation and your vulnerability right now.
Stay away from it.

Whether they are financial, moving, divorcing or purchasing decisions.   Your mind is not clear right now.

Any big decisions you make right now is being clouded by your pain, your reasoning isn’t clear, and you will likely regret major decisions made during this time.

For example: My husband bought a truck shortly after D-Day.
He felt justified because he was driving a crappy car and he wanted to “feel better” and do something just for him. $30,000 later and he drove away with a brand new truck we really couldn’t afford.
Realizing his mistake a week later, he tried to return it to the dealer and they wouldn’t take it back (ugh),  so he traded it in at a loss for a cheaper car.

I know you feel there are a lot of decisions you should make right now after finding out about your wife’s affair.
You might think you should quickly divorce your wife because you are hurt (rightfully so), and you can’t imagine staying in a marriage with her after finding out she’s cheated on you.

I would gently advise you to slow down. You can decide to divorce her later. There’s time.
But what you don’t want to do is make that decision right now and realize later that you both didn’t do everything you could have done to save your marriage.
Especially if you have kiddos involved.

Do everything you can now to see if the marriage can be saved so you’ll always know later you did all you could.

Talk to her about your future together and see where she’s at with the marriage and if she’s willing to get help together.

view, this is a very vulnerable and emotional time for you right now, so don’t:

What part of this post hit home for you?  Is there anything you need to do, or undo, today?

Remember, You will get through this!

Also, if you didn’t see the link above, read the first half of this post titled

Top 5 things TO DO and how to cope  after finding out about your wife’s affair.

Also, did you see the letter written just for you, the betrayed husband? You can read it here.

So there’s things to do and things not to do, as you just read.

For more help and learning, read the post about how to forgive your spouse here.

Or, What forgiveness is not, here.

Sometimes when life is not going as we hoped, we can feel we have no control over anything in our lives,
I wrote this post with that in mind…What do you want your life to be?

« How to cope when your wife is having an affair
how do affairs really begin? »