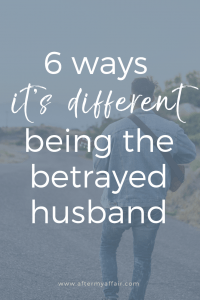 There’s a lot of assumptions, opinions and expectations when it’s the husband who was betrayed.
Many assume a betrayed husband experiences the same challenges, and feelings, a betrayed wife faces.
To some degree they do. Either way, it’s a trauma.

But there’s also many differences for betrayed husbands, and many people don’t understand that.
That’s what I want to break down for you today.

Did you know that more than half the time, when a wife is unfaithful,  the affair partner is a close family friend,
another church member or someone the husband and family knows fairly well?
So the betrayal is even worse when another guy ‘breaks the code’ of not stealing another mans wife.
(which I know many betrayed wives can relate to as well).

Some of the unique challenges and differences that occur, when it’s the male spouse who was betrayed,
is because men and women react to this level of personal trauma of betrayal differently.

Not too many women will feel it’s affected her “womanhood” the way a betrayed husband often feels his “manhood” was severely hit.
Even the healing process is different for men.

Although, please understand, I’m not saying it’s more painful to be the betrayed husband than it is a betrayed wife,
but the differences are there and often misunderstood, that’s why I’m bringing it up.

1. The expectations on what a betrayed husband should do,
in response to their wife’s affair, is often very different.

First of all, most men are expected to ‘be strong’ and ‘push through’ any of their feelings without really talking about them much.

Plus, many friends, family members, pastors and even counselors (who are not very experienced in dealing with infidelity-especially
when the wife is unfaithful), will often give advice that tends to actually make things worse.

For example: many betrayed husbands are told by well meaning people, one of 2 things:
1. Work harder to show her your love and affection; do whatever it takes to win her back.
OR
2. They give ‘tough love’ advice like lock the doors, kick her out etc…

I’ve seen men who basically become doormats for their wayward wife to do what she wants.
This only causes a man to lose his self-respect, thinking that if he makes great efforts to win her back, she’ll see the light.

Too often, chasing after a wayward wife, actually creates the opposite result,
causing a wife to recoil further away.

When a woman is disconnected, and even ambivalent, about staying in her marriage,
and well meaning people tell the husband to push in and work harder to win her back,
she’ll often see that as desperation which only pushes her further away.

Because infidelity is not as easily fixed, like just having an argument, so those usually methods won’t work.
Besides, desperation doesn’t look good on anyone, my friends.

Nobody should tell you what you need to do in your marriage.

When quick and rash decisions like this are made, there can often be a lot of regret later,
always wondering if they gave up too quick.

So, this only creates more rejection and trauma for a husband.

2. From a man’s point of view, his wife’s affair directly affects his manhood.

Many men will use words to describe how they’re feeling about their wife’s affair, such as:
“Feeling emasculated, impotent, less of a man” or he feels he’s “lost his identity as a man”.

So those are issues he really needs to deal with.

Many men assume their wife’s affair means they’re not as much of a man, and wonder what the other man
has that he doesn’t.
But that’s really not true, and it’s really damaging for a betrayed husband to believe.

If you’re that betrayed husband reading this,
just know that her affair was more about her, than it was about you.

Something within her was lacking, and she chose to look elsewhere for validation and connection rather than to you, her husband, and to the marriage.

Men frequently go to the place of ‘sexual comparisons’.

Most women “affair down”.

The Limerence stage of affairs can create quite an affair fog.

I won’t get into all the reasons why this may occur here,
but hopefully it will provide some relief to you, if you’re a betrayed husband,
to recognize it wasn’t because the other guy was better than you, as it’s often the opposite.

I know this seems like a broad generalization, and some men are the exception to the rule.
But the majority of men shut down emotionally when something like a betrayal happens to them.
It’s the message men are given from the time they’re little boys- to be a man you don’t cry or show your feelings.

So what’s a betrayed husband supposed to do when he’s just been hit with the deepest pain any man can experience?
They find ways to compartmentalize the pain and wall it off from the rest of their lives to just try to function.
Oftentimes, many men also refuse counseling, which is unlike most women.

Whereas most betrayed females usually want to talk about it, get their feelings out and discover all the reasons why
this happened etc…
Most betrayed men have just as much pain, but he may cry alone and in private,  he’s less likely to want to see
a counselor or take anti-depressents and he often experiences a fight or flight reaction to his trauma of betrayal.

This can be quite confusing for them because they may feel torn in making a decision to divorce her or not-and
likely want to do both, often within minutes of each other! It’s normal.

Many men feel like they’re really weak if they stay in the marriage, like a ‘real man’ wouldn’t put up with it.
My husband struggled with that too.  But I always say it takes a heck of a lot more strength and courage to stay
and work on the marriage, sorting through the process of grief and forgiveness, instead of divorcing her quickly.

(Sometimes though he may try a long time, with no desire to change on his wife’s part and there’s only so much of that
one can take.  The time for that is different for everyone and only you can answer for yourself).

4. Most men naturally try to figure out ways to fix problems…
but infidelity is different.

Men are natural problem solvers, and their first thought is often “tell me what to do and I’ll do it.”
But of course, a wife’s infidelity doesn’t work that way.

There’s no quick fix solution, and it cuts a guy to his core, that she chose another guy over him.

Once he realizes his normal ways of attacking a problem doesn’t work in this scenario, he can get even more frustrated when he sees this is
pretty much out of his control.

5. An unfaithful wife’s reasons for being in a affair,
is often much different than a unfaithful husband’s reasons.

Because of this difference, the response from a betrayed husband must be different, too.

It’s hard to be emotionally available and connected to two people, right?  So all her attention soon shifts to the affair partner, to fulfill her needs.

Another factor, is her desire to inwardly justify her behavior,
by changing the story and history of their entire marriage.

This is actually quite common in both unfaithful women and men.

I eventually felt myself wanting to do that, although for the most part I kept holding to my belief that we did have a happy marriage
and Jim is a good husband. But the more I reiterated how happy we were in my mind, the more guilt
I’d have when continuing on and off in the affair. So I can see why unfaithful’s do this.

Rewriting history is a common tactic to dull the guilt, and justify to themselves, why they’re doing this.

6. Many unfaithful wives will push back, during their affair,
against the kindness and love from their husbands.

We touched on this in #1 because it’s often the advice people give to a man whose wife is cheating.

This can lead many men to feeling hopeless in not knowing what they’re supposed to do.
Yet,  this doesn’t mean you should also be cold and withdrawn from her.
Finding a balance between overtly pushing her to re-engage, and being aloof toward her too, is important.

This post may lead you to feeling like “Well what’s a husband supposed to do about his unfaithful wife then?”

How to cope when your wife is having an  affair.

What to do when your wife won’t end her affair.

Also check out this collection of betrayed husband posts.