7 benefits of having an affair…
which are really not benefits at all. 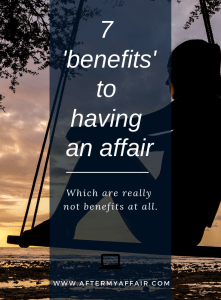 7 benefits of having an affair?  Am I crazy?

Now before you write me a nasty email thinking I’m promoting infidelity, please read on.
(and yes, I’ve already gotten that from this post, from someone who obviously didn’t read the whole thing).

I  just want to expose the lies that go through many unfaithful spouses minds before they cheated.

Because in the mind of the wayward spouse, they went into having an affair, because they thought there’s some benefit in it for them.
We don’t like to think of it, but it’s human nature.  We only do those things we feel we’ll benefit from.

It seems everywhere we turn these days there’s talk of infidelity, affair’s, adultery, cheating, indiscretions, or whatever name you want to give it.
Some vulnerable people might start thinking, “hey, there must be real benefits to having an affair”.

So, let’s dive into the lies (benefits) you might
hear in your head to go ahead and have an affair.

Then I’ll explain the truth of what an affair will really will give you.

Of course, If you’re determined, or “hell bent”, on having an affair, there’s not too much anyone can say to keep you from acting upon your desires.

1. “I need the attention and affection right now”.

The attention will come in whispers or even potentially getting fired from your job, once your affair is found out.
Is that really the kind of attention you want?

2. “It will be fun, I need some excitement in my life”, you may reason to yourself.

This is the type of excitement, however, that you’ll pay for in misery for a long time to come.  Maybe you’ll be able to push down the guilt for awhile, but the truth is,
payday comes eventually.  It’s not worth the momentary thrill you felt.

4. “My spouse and I just don’t get along anymore, this other person really loves me.”

Real and mature love pushes past this phase to find a deeper love and commitment below, if we’re willing to find it. Remember the ‘grass is always greener’ analogy? It’s true.

5. “It’s just sex, it doesn’t mean anything, and it won’t hurt anyone, as long as nobody finds out.”

But it’s a dangerous game of Russian roulette you’re playing with your own body and soul, as well as the relationships with your family and God.

6. “I just feel happy with this other person.”

Feelings lie to us and, if we follow them, we’ll eventually feel the opposite of what we thought we’d feel.

Instead of having an affair to do something for yourself, how about start a new adventure, take a mini-vacation,  read a new book etc…

In conclusion, you’ll see these ‘ 7 benefits of having an affair’ aren’t really very beneficial after all.

I was true to my word that this is what you’ll ‘gain’. But are they benefits?
Well, your mind is likely telling you you’ll benefit if you have an affair, but now that we’ve look closely at the truth of these benefits, you decide.

Sometimes we don’t want to look at the truth of what our life will be after we make our choices.

You can also read this post,  where I actually list 18 reasons why NOT to have an affair.

See, I know firsthand how destructive and dangerous having an affair is.
I’m sure I was thinking many of these lies before I went down that road, so forgive me for my bluntness.

I’m just tired of hearing about the devastation an affair has had on another marriage and another family.
This is not even mentioning the intense guilt and shame many women who contact me are feeling everyday.

That’s not a benefit.

You WON’T be better afterwards. Trust me on this.

Nothing you do in the future will be able to change this decision.

Most people will site their affair as one of the biggest mistakes, and regret, of their lives. Nobody leaves this earth wishing they’d had an affair, but ask any one who’ve lived through having one, or been the spouse of a cheater, and they’ll likely say it was one of the most painful times in their lives.

But you decide if that is a benefit.

« Psalm 51 A Prayer of Repentance
Healing your marriage after infidelity »