Affair Fog.
Part 1: What affair fog is not.

As you likely know, Affair Fog is not an actual fog someone is in.
It’s not a medical condition, or something that’s easily diagnosed with a test to see if you have it.
It’s more a state of mind someone’s in, while they’re actively acting out in an affair.

The fog in my backyard. 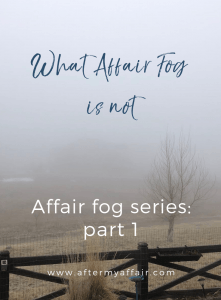 I woke up yesterday morning to a thick blanket of fog
hanging eerily in the sky.

This is a picture of our backyard that I took.
We back to open space, where we normally can see for many miles.
But yesterday, we could barely see 1/8 of a mile behind us.

I actually love when the fog rolls in, here in Colorado.
There’s something mystical , almost beautiful, about it.

Yet, there’s nothing beautiful about affairs; affair fog in particular.
I’ve been wanting to write this post for awhile.

But first, so we all understand what I’m talking about,
let’s define briefly what “Affair Fog” is.

(I’ll go into more detail in the next post in this series, “Part 2: What affair fog really is, along with the symptoms”.
But I want to briefly define it here first, so we’re clear on what it is we’re talking about.)

“Affair fog is a term many affair and marriage experts use to describe
the state of mind a wayward spouse is in while they’re acting out in their affair.
It typically manifests itself in their behaviors, words, and even appearances, which all become very uncharacteristic for them.
These changes in them become so different, it can seem like they’ve morphed into somebody else completely.
Usually, their new affair relationship has superseded (in terms of fulfillment and connection)
anything they remember having in their marriage, or within themselves while married.
The more time they spend with their affair partner, only reinforces this wonderful euphoric experience, in their mind.
This affair fog is an altered state of their own reality.
It’s the classic ‘first stage of an affair’ which is often described as “limerence- the first stage of euphoric love”.

It’s a question I get asked often by my readers, and I also bring it up quite a bit in my own writings.

Another site said they “don’t believe in an affair fog that absolves cheaters from moral culpability.”
Well, I agree with them… sort of.

The real experts in affair recovery, and marriage counseling, all believe there is some type of delusion
that many most unfaithful spouses seem to be under. 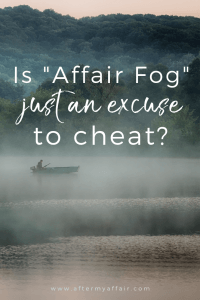 tainly not.  But let me be clear on my stand.

So, no, it’s not to feel sympathy for the ‘cheater’, or give them an excuse,
to not take responsibility for the pain their affair caused.

It’s simply to put a term to the extreme delusional changes in someone who’s in an affair.

The haters are gonna hate, no matter what explanations are given.

Affair Fog has nothing to do with excusing the affair because of a mental disorder.

That’s not to say that some people, who are unfaithful, don’t have a mental disorder.
There’s a lot of conditions a wayward spouse may have already had anyway
(narcissism, personality or emotional disorder, PTSD from childhood or prior event).

But, so far there’s no evidence that people who have a mental or personality disorder have affairs, any more often than those who don’t.

Just as we’re saying, we don’t blame Affair Fog for their affair before it happened; or, for leading them to have an affair.
No, they developed this delusional Affair Fog, AFTER they’d participated in the infidelity for awhile.

Affair fog is the result, after a period of time a person’s spent in the affair, while ‘swimming’ in it’s delusion.
They didn’t have the affair because of the affair fog first. It didn’t hit them over the head and ‘make them cheat’.

Finally, to review on this first part series of what affair fog is not.

1. Affair fog is not because of a mental problem, personality disorder or emotional problem.
Someone may have those issues, but we can’t blame their affair on that; otherwise, there’d be a lot more wayward spouses.
2. It’s not an excuse for an affair. It’s not like a free ‘get out of jail card’, or a ‘the affair fog made me do it’ excuse.
Just like the pool only made my skin smell like chlorine after I went swimming, affair fog happens after someone’s been acting out in an affair.
3. Deception and delusion often go hand in hand.  It’s hard to have one without the other, eventually.

Personally, I can say from firsthand experience looking back on my own terrible infidelity, how I was very much in a fog while in the affair.
I started acting, thinking, and behaving, in such an uncharacteristic way than my normal self.
I may not have wanted to admit it, but I remember sometimes wondering who I really was.
I’d get convicted and felt like I was changing dramatically; but by then I was so entangled in the web of the affair, it was hard to think clearly.
That’s how I know and believe firsthand, in affair fog.

5 signs to watch out for of affair fog
the 4 stages of an affair
If you’re an unfaithful wife, read this letter from me– I’ve been where you are and understand the pain!
Proven advice for breaking up with your affair partner.
How to prevent relapse of your affair.

If you’re the wayward spouse, and you know you’ve been caught in affair fog but want out of it now,