Making the decision to burn the ships in your marriage after infidelity.

It was 13 years ago, but it might as well have been yesterday, I remember it so well. 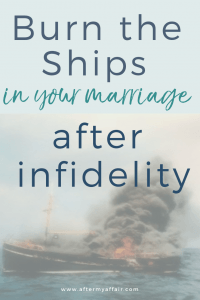 We sat in this older couples living room, on one of the darkest nights of our marriage.
This elder from our church, and his wife, heard our story and invited us over.
We hadn’t even met them before that night,
but our friends told them how dire our situation was, and they thought if they spoke to us, it would help.

After we entered their house, we made small talk about the beautiful family pictures on the wall.
One group photo was this couple with their adult sons, daughters, and grandchildren, all gathered around smiling for the camera.
I was struck by the words on a plaque hanging up next to their family photo,
with this saying: “All because two people fell in love.”

I remember thinking, “we could have had that plaque on our wall any of the prior 19 years before this, but now…could that ever be true again?”

Now all a plaque would say is “we’re in this mess, all because Debbie made the biggest mistake of her life and had an affair.”
After the small talk, we made our way to the living room.

We briefly explained the terrible mess of our broken marriage, and with my head hung low, I fully expected to be scorned and shamed.

Why would they be any different? With the exception of 3 other people in our lives,
all others had expressed their disgust and disappointment in me when they heard our story.
Even my pastor, and the recovery ministry leaders at our church, showed their judgment and scorn
in a private meeting we all had. And what could I say in my defense for their rejection?
Nothing.
What I did was horribly wrong, and shame had become my new unwelcome companion.
(I don’t really blame anyone anymore for this, they each did only what they knew to do, and had the maturity to handle.
I’m just thankful for the few who stood by us in prayer, and didn’t shame me.)

I wondered, why would this meeting be any different?
But I went with Jim to this couples house anyway, because we were desperate.

We told Ron and Donna that we were trying to heal after my affair.
But the previous 11 months of my back and forth with the affair partner made his trust in me beyond zero.
Jim explained he didn’t know if he could continue doing this anymore.
He was undecided if he would stay with me, or if we should divorce, although he still loved me and didn’t want to divorce.

We were doubly hurt because of his emotional affair he’d also started a few months into mine,
because of his own pain and vulnerability in wanting to feel better.

But he couldn’t live like this, and I didn’t blame him.

I knew in my heart that I was done with the affair, but how could he know?
My affair fog was lifting, only to reveal the damage that I’d created in its place.

We were terribly stuck.

After explaining our situation, and then bracing myself for the shame that I knew would come… something happened.

Instead of Ron looking at me in scorn over my past, he was looking to Jim to decide on our future.
Ron told Jim it’s time now to take the leadership role, and decide what he wants to do;
to not waver back and forth in indecision, keeping both of us, and our kids, in this uncertainty.

Then Ron said something that we never forgot. He said “Jim, it’s time you put a stake in the ground right here, right now.
You make a decision of what you want to do. Don’t keep her hanging any longer with your indecision of staying in the marriage or ending it.
She can’t change the past, but you can both change the future. If you decide to end it, then tell her.
But today’s the day for you to put that stake in the ground of decision.”

Then he added, “and if you decide to move forward and work on your marriage, then burn the ships and don’t look back.
Don’t give yourselves a way to turn back, make the decision on this day and move forward in conquering this thing and healing your marriage. “

You might have heard that saying before. Many motivational speakers, leaders and life coaches have said it in recent years.

It’s primarily referring to the story of when Alexander The Great arrived on the shores of Persia,
ut he quickly realized they were outnumbered by the Persian military. Plus they had the advantage over the Greeks
by fighting on their home soil; they were one of the most powerful military forces of their time.

Yet, even in the face of these difficult circumstances, Alexander gave his men the order:
“Burn the ships!” The story goes that Alexander turned to his men and said, “We take this territory as our own, or we go home in Persian ships, or we die.”
So, they burned the only resource they had to get out of there. . They had no other means of escape, they had to be all in or they’d die.
This is how Alexander the Great was named because of how he led the Greeks to an amazing victory over the Persians.

Wikipedia says:
“Figuratively, (Burn the ships, or boats) means to commit oneself to a particular course of action by making an alternative course impossible. “

After we all prayed together,
we left there feeling a renewed sense of purpose and commitment.

It didn’t mean reconnecting with each other, and restoring my husbands trust in me was easy after that.
Actually, it was still pretty difficult on most days.
But we had made a new commitment and determination to fight for our marriage,
to not look back, but only find ways to conquer this attack upon our marriage…together.

That decision was the first step in our restoration.
It might have seemed uneventful to anyone else on the outside.
I didn’t do everything perfectly after that night, and he didn’t either.

But we were trying.

Soon after that night of burning the ships after infidelity, I found a picture to commemorate that decision.
The picture you see is framed and hangs on our bathroom wall ever since those early days.

It’s our reminder that we’ve burned the ships. We won’t be using any alternate routes out of this, we’re committed to seeing this through.

Some days, in the weeks and months after that night, I was still discouraged. It felt like the pain would never go away.
I remember asking him if he thought we’d ever NOT feel like this someday. Would he ever trust me again?
Would the affair ever NOT be the center of every thought and conversation we had, someday?
I didn’t have those answers at the time.
We only knew 2 couples personally that made it through an affair, that talked about it.

What burning the boats (ships) in marriage meant for us.

We held onto hope that this decision to burn the ships,
and stay married, would all work out someday.

Every week we made more and more progress, although I couldn’t always see it at the time.
It’s like the saying goes “you can’t see the forest through the trees” we couldn’t see our progress with healing at the time.
But after some time passed, we were able to take a step back and see how far we’d come.

It’s like climbing a mountain, every step up that steep mountain seems hard as you try not to lose your footing.
You don’t know how far you’ve come, because you’re so busy taking the next step, not tripping over any rocks to avoid stumbling.
But then you make it to the top, and look back, and wow, you can hardly see the bottom of that mountain, where it all started.

Healing from an affair, is a lot like that.
And now, 12 years later, I can say it was the best decision we ever made.
We’re both grandparents ourselves, and much like the picture I saw on that couples wall, it’s all because two people fell in love.
We’re two broken, fallen people, but we absolutely love each other and want our story to give you hope for your marriage to be restored too.

How can you burn the ships in your marriage?

« What Is Affair Fog-5 signs to watch for
What Is An Emotional Affair? And Is It Really Cheating? »