Is there hope and healing after infidelity?

Is having hope naive? 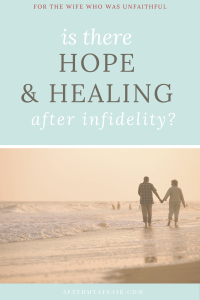 For just a second today, I was wondering if I was being naive to offer hope to you,
that a marriage can survive an affair.

Notice I said Just. A. Second.

Because what I know to be true is that hope is the one thing that will keep you going,
even when you’re tired and want to give up.

Just so we’re on the same page, let’s define HOPE:

the feeling that what is wanted can be had or that events will turn out for the best;
a particular instance of this feeling.

Verb: hoped, hop·ing.
to look forward to with desire and reasonable confidence.
to believe, desire, or trust;
to feel that something desired may happen.

Hope (like faith) is believing for what you cannot yet see.

So I’m talking about hoping and believing for what you cannot yet see;
whether it’s for your marriage, or for your own healing after all infidelity.

But I questioned it momentarily because I recently got an angry email from a man
who thought it was audacious of me to express any hope for marriages to be restored after infidelity.

His marriage did not survive after his wife’s affair many years ago, and the message woven into the email was
‘how dare I offer hope to anyone.’

I felt sad that his marriage didn’t make it, and that he was still suffering after all these years with anger and resentment…
obviously still holding onto something to be looking at a website on affair recovery.

But I was most sad for his lack of hope, and unbelief, that other marriages really can survive this.
Or that he could someday personally heal and move forward.

But that doesn’t dissuade me from shouting hope from the rooftops.

Because if there’s anything most couples need when trying to recover from an affair is hope;
and there’s far too many haters who would rather talk against the hope for healing.

Hope that they can do more than just survive but thrive.

Hope that it won’t always be this hard and that trust really can come back one day.

Am I naive to think it always happens? Absolutely not.

The reality is- some marriages won’t make it.

Some people can’t, or won’t, get past their spouse’s affair no matter what the unfaithful spouse does to try to make things right.

And unfortunately, some unfaithful spouses won’t end their affair; they stay stuck in the back and forth cycle of illusion and fantasy that the affair is…
and their spouse (understandably) cannot hold on any longer, so they divorce.

We cannot control other people, or the choices they make- and sometimes people’s choices force our hand-
even when we’ve done all we can.

Whether your marriage has survived or not, don’t lose hope in your own future.
The damage after infidelity can be healed and your story is not over.

I’m aware that those are the facts in many people’s lives right now.

But that doesn’t mean it has to be your reality- if you both don’t want it to be.

The truth is, rebuilding a marriage after infidelity is hard work.

And then do everything they can to help their spouse heal.

And true restoration  also requires the betrayed to learn how to forgive their spouse.
That doesn’t mean you should trust them right away though.

Read about what forgiveness is NOT in this post.

Healing your own soul, and forgiving yourself, requires faith that God’s forgiveness of you
is enough- if you’ve asked him for that.

Hope for healing after infidelity can eventually occur in your life,
regardless of what your feelings of shame or betrayal tell you.

But at the foundation of all of this is hope. 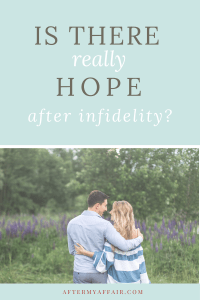 There are many marriages that DO survive infidelity, and if both are willing, I believe it certainly is attainable.

I would ask you the most important question though- what is your hope in?

My husband and I knew this recovery thing was way bigger than us,
and we both cried out to The Lord more than ever for His help.

So our hope was in One who loves us and was able to do the impossible, not just in each other’s ability to get past it-
because we’d both let each other down.

He restored our love for each other, despite all that happened.

And I’ve witnessed many other couples’ marriages restored after infidelity too.

The reality is- it takes time to heal from infidelity.

However, time  is not enough; it’s what you do during that time that will make the difference-
to heal yourself, your marriage and your family.

Yet, without hope that it will get better- you won’t be able to hang in there during the rough days.
And there will be rough days ahead- that’s the honest truth.

But don’t ever let anyone try to convince you that a marriage cannot truly be happy again after an affair.

And don’t ever give up hope that your own healing will occur.

Also, don’t believe the old adage of “once a cheater, always a cheater.”

I don’t think any of us would want to be defined forever by our worst mistakes from our past.

So the next hard day you face in this journey- realize that it’s normal, and part of the affair recovery process.

If you both want this marriage to survive, then hold onto hope while doing everything you can to restore the marriage.

And if your marriage has not survived…never lose hope that you can heal and move forward from this trauma.

Your story is not over my friend.

Never lose hope in that.

My letter to the wife who was unfaithful.

My letter to betrayed husbands here.

Click here if you’re a wife who was unfaithful,  and would like to work with me after your affair.

« How do you forgive yourself after an affair?
9 Excuses That Are Preventing You From Ending The Affair »