How do affairs begin?


Here are 6 warning signs you might be heading into an potential affair. 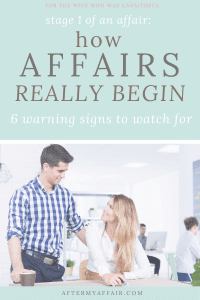 re are often signs beforehand that a woman
is heading into an affair.

Every affair begins somewhere.
They all have a fairly predictable start.

After an affair is over, many women will say they
‘don’t understand how they could be have allowed themselves to be unfaithful’
and they’re often confused about how they got into the situation in the first place.

Yet, there are always signs to look for.

1. The foundation is always set and the conditions are ripe before an affair even starts.

Those conditions can be as innocent as discontentment or unhappiness within a woman’s heart and life.
The condition of her heart could be cold toward her husband and perhaps small resentments have built up.
Left unchecked and not talked about, resentments are seeds that can grow into displeasure and a desire to find happiness in someone else.

Perhaps there has not been any real connection in her marriage and time has slipped away with the responsibilities of work, children and financial obligations.
The foundation of communication that exists in a good, thriving marriage may be lacking.
Has it been months and months before any real date night?
Has life become so busy they are lacking any real intimacy or depth of conversation?  This void creates a vacuum that a wife will seek to fill somehow.

If a marriage continues without connection, temptation to stray may present itself and a woman who would otherwise never consider infidelity may be more tempted during this vulnerable time.

To read more in detail the reasons why women have affairs, click here.

2.  The opportunities present themselves with another man; filling her emotional needs.

It could present itself in any number of ways: 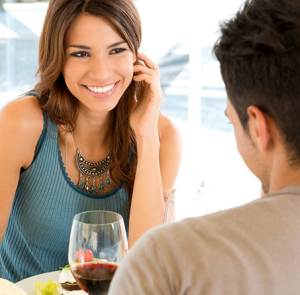 Speaking with him has awakened a desire in her that has not been there for a long time.
It starts innocently enough, perhaps being just friends and talking about platonic things.
Yet, if she is not careful she will find herself inching closer to infidelity.

3. Warning signs that a woman is flirting with the dangers of infidelity,
even if she is oblivious to it at first:

1. She finds herself wanting to be this other man more, and finds excuses to manipulate her schedule and situations to allow them to spend more time together.

2. Her thoughts are more preoccupied with thinking about him and other family obligations are pushed aside, even if she is the only one who notices this at first.

3. She becomes more interested in her appearance and will take more time to get ready and dolled up when she knows she will be seeing him.

4. She may lose weight or get a new haircut or clothes to be more attractive.

5. Wondering whether this other man is attracted to her will start to invade her thoughts more.

6. She will justify to herself and anyone who questions her behavior that they are “just friends” and nothing more.

7. She may find herself getting excited to see texts, emails or calls from him. If these become more frequent,
she’ll attempt to hide the frequency and down play her feelings for him.

8. She may begin to hide her phone or social media contact with him.

10. The conversations with another man has become personal about his marriage or hers. Discussing problems or personal issues that would normally have been off limits are shared.

4. But what about an emotional affair?

These are all some of the warning signs that a woman is heading into an affair if she does not take action and change her behavior.

5. The turning point for a woman heading toward an affair.

At some point, a woman will face a turning point in her friendship with another man.
Especially if she feels an attraction but is downplaying it.

Either she’ll heed the warning around her, that she’s gotten too emotionally close, and preoccupied, with another man;
or she will make the unfortunate decision to let him know how she feels.
I did the second choice.  Don’t be like me.

If you’re that woman who knows in your heart that you’re attracted to or interested in another man,
back away from the relationship now.  It doesn’t matter if he’s friends of the family, from your church, or a co-worker.
It’s not worth risking your marriage, your integrity, your self-respect and your family.

Be willing to take very drastic steps to keep the relationship from becoming an affair.
Trust me, it too easily can turn into something else, right when you’re thinking you’d never do that.

6. How can a woman change course, if she suspects she’s headed toward an affair?

I’ll speak directly to you now, if you are that woman I’ve been talking about.
Take it from someone who didn’t heed the warnings, turn back now.   You’d be wise to do the following:

These will feel drastic and extreme to you at first.   you might  wrestle with feelings of guilt over hurting his feelings, and not being nice.
However, if you’re a woman who recognizes ANY of these warning signs, be resolute in your commitment to your marriage.

Make no mistake, any relationship that continues with the opposite sex after these warning signs are observed,
will very likely end in a devastating and heartbreaking affair.

It is easier to break off a friendship with another man now, than a full fledged affair later, when you’re marriage is broken,  and your reputation is shot.

To read general stages of affairs and how the process usually goes, click here.

Where are within this list?  Do you think you might be venturing too close to the edge of having an affair?
feel free to comment below.

If you’re tempted to start an affair, and you liked this post, read these:

What is an Emotional Affair? and is it really cheating?

Why it’s so hard ending an affair.

How To End An Affair When You’re Ambivalent

If you’re caught up in an affair, request to join my private facebook group for Unfaithful Wives only
Called AMA Women in groups.  Click here for the request to join.
Please don’t forget to answer the 3 questions, as I don’t let anyone in if they haven’t.