What does it mean to turn from sin? 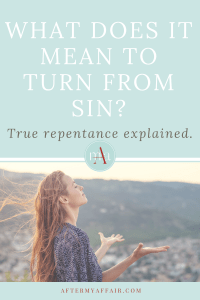 Perhaps you’re here because you’re at the end of your own proverbial rope.
Maybe adultery has touched your life in some way and you’re facing a huge mess now.
If you’re the one who was unfaithful, this post is for you.

We can be at such a loss in trying to sort through all the hurt and destruction from our choices that
it’s hard to know where to start.

How do you put your life back together, heal broken hearts (that you broke),
and find some semblance of self-respect, healing and peace again?

It’s a process, my friend.

But the first step is always repentance.
Repentance to God, and then your spouse.

Because if we understood how our sins hurt us, and hurt God and our relationship with God and our eternity…
we would want to repent of them and allow God’s love and forgiveness to bring healing.

So in this post I want to talk about what true repentance is.

We’re also going to look at the perfect illustration that Jesus gave of what true repentance looks like.

We don’t hear too much about sin or repentance these days.

It seems like many would like a ‘feel good message’,
but this is one of the most important things you can learn, and practice, in your life.

First, it’s important we understand what repentance really is, and what it is not.


Repentance is not an emotion.

I’ve seen many times, some preachers will seek to work people up into an emotional attitude,
and then call them to faith in Christ by praying a ‘sinners prayer’.

Very often, that leads to a let down, because when the emotion runs out- they’re left with nothing…
no real transformation into becoming a new creation in Christ because they based it on an emotion.

So keep in mind- repentance as defined in the Bible is not an emotion.
It is a decision that doesn’t spring from the emotions,  it springs from the will.

If we can reach people’s will (or our own) and turn that will,  we’ll see permanent conversions.

Many so-called conversions in the church today are not permanent because they had never really changed their will.
They had an emotional experience- they got excited.

Maybe they felt wonderful for a few weeks or months or even years,
but in the end they don’t have what it takes to go through because their will was not touched.

What is true repentance?

1) TRUE REPENTANCE is based on a recognition that we have sinned.
It is the supernatural power of God that has been placed in the gospel, which enables a person to repent. (God’s saving Grace)

2) TRUE REPENTANCE also involves a recognition that we are responsible to turn from our sins to God.
Repentance is an inner change of mind resulting in an outward turning back, or turning around,
to face and to move in a completely new direction.

This turning around has three elements.
A turning from sin and dead works, a turning to God, and an intent to serve Him and to obey His commands.

Where the word Repent comes from and how the bible defines it.

There’s 2 Main languages of the Bible: the Greek of the New Testament and Hebrew of the Old Testament.
Each of all those languages has a specific word for repent- but only if we put the two languages together, do we get the full meaning of repentance.

The Greek word for repent, in secular language, is always translated- “to change your mind; to change the way you think.”

So first of all, repentance is changing your mind about the way you’ve been living.

For example:  “I’ve been living to please myself  and I’ve been doing my own thing and from now on I’m going to live to please Jesus my Savior.”

The Hebrew word for repent means literally “to turn around”.

You’ve been facing the wrong way with your back to God- you turn 180 degrees and face God saying
“God I’m sorry for my sins.  God here I am, tell me what to do and I’ll do it.”

So you put the two together, and you have a complete picture of repentance.
Change your mind and change the way you’re thinking about your sin;
then turn around toward God telling Him your sorrow for sinning against Him.

Faith comes only AFTER repentance.

The whole message of the bible is in this order: Repent and Believe.

I believe there are a lot of people who are struggling for faith.
The truth is you’re not struggling for faith, you’ve never met the condition of repentance.
You see, it’s the first of the six foundational doctrines and if you don’t have that foundational stone in place,
the rest of what you’re building upon in your spiritual life will always be wobbly.

Preacher Derek Prince says “I have counseled hundreds of Christians, who come with their personal problems.
After a lot of experience, I came to this conclusion; at least 50% of the problems that professing Christians are having
is because they have never truly repented.
They have never really changed their mind.  They never really made a decision to the Lordship of Jesus in their life.

And so we have many,many people who are double-minded.
The Bible says a double-minded man is unstable in all his ways. (James 1:8)
He doesn’t have a solid foundation, so he can’t produce a stable building.

So, I encourage you to take a few moments and ask yourself-
“have I ever really truly repented? Or am I double-minded?”

Now let’s talk  about the nature of repentance.

There is one parable that Jesus told, which is the most vivid and perfect illustration of true repentance.

It is the parable of the prodigal son, and somebody else has said it should be called the ‘caring father.’
(If you’re a woman reading this who have been unfaithful in your marriage, then you’re like me as I was
the prodigal daughter at one time.)

The second son, from a wealthy family, decided to get all his inheritance now.
So he went off to a distant country and lived it up in sinful things and sinful living.
After he spent his inheritance, a famine came, and the only job he could get was feeding the pigs.

Here he is, in rags, feeding the pigs- hungry and longing to eat the slop that the pigs were eating.

Then this is what happens- in verse 17: “But when he came to himself, he said”….

that’s the main point- you have to come to yourself– your moment of truth,
see yourself as you really are and as God sees you and what He wants for you.

Luke 15: 17  “When he came to himself, he said ‘how many of my father’s hired servants have bread enough and to spare,
and I perish with hunger! I will arise and go to my father and will say to him ‘Father, I have sinned against heaven and before you,
and I’m no longer worthy to be called your son.  Make me like one of your hired servants.”

You can see the 2 important truths taking place there.

Because it goes on to say “and he arose and came to his father”.
So, he made a decision and turned around from the lifestyle he was living and turned back to his father in repentance.


That’s true repentance…
making a decision and carrying out your decision to turn from sin.

Going back to the Father you have offended; to the God who loves you saying:
“I’ve made a mess of my life. I can’t run my own life. I sinned against you.  I need you.”

The wonderful thing is, he planned to say to the Father ‘make me as one of your hired servants.’

But his Father was watching for him from far off, and as he got closer, he ran to meet his son.

This is such a beautiful image of how God is.
When we begin to turn, he’s watching for us.
The father saw him a long way off and ran to meet him.
That’s how God is.  That’s how he meets us.
And he kissed him, and he never let him say “let me be one of your servants.’

No, he said,  “Bring out the best robe, kill the fatted calf, put a ring on his finger and sandals on him.”
That’s the result of true repentance.

It’s worth repenting to be welcomed like that by God.

So,
1) “He came to himself. ” He said basically, “I made a mess of my life. I wasted everything my father gave me.”
He faced the truth of what he did.  He didn’t blame anyone else or try to hide from it any longer.

2) Then he took action. He didn’t just sit there in self-pity.
He said “But I’m going to make a decision to turn around and go back to my Father and say I’m sorry; and he turned and went.”

That is true repentance in action.

Think about that regarding yourself and where you are today.   Have you done this yet?

The most significant moment in anyone’s life is when God begins to deal with you about repentance.
But if you shrug your shoulders and say “well I’m not interested, maybe later”…there’s no guarantee that God will deal with you again,
or that you’ll get another tomorrow.

The most critical moment in anyone’s life is when God deals with your heart.
When he says “Come back to me.  I’m willing to take you back.  I love you, I want you.”

One thing you can see throughout the bible that really makes God angry is despising God’s grace.
He’s saying to you now: Come to me. Turn to me and let me help you.

If you’ve never known the forgiveness of God that is found through Jesus’s death on the cross and his resurrection,
He invites you to come to Him and believe.
He paid the ultimate price by laying down His life, as an atonement for your sins to be pardoned by God’s grace for whoever will put their trust in Him alone.
Not Jesus plus other religions, or gods, idols, or sins.

But you’ve got to repent and ask Him in; trust what Jesus did on the cross for you (even if you don’t understand it all yet),
and stop trying to be ‘good enough’ for God.
You and I will never be good enough- if we could have then Jesus never would have needed to die for us.

If you’ve once known Jesus Christ as His son or daughter and you’ve backslidden (walked away from God into sin), come back to Him now.
Don’t wait.  Repent of your wayward heart.

Either way, I hope you will take some time with Almighty God who is right there by your side now- waiting.
Use your own words to repent- turn back to Him everyday for strength and relationship, and away from the life of sin.

Notes taken from a Derek Prince sermon- edited and revised for this subject matter.
You can watch the YouTube version of this post where the sermon from Derek Prince came from here.

How to end an affair

For the betrayed husband