6 ways to distinguish what forgiveness IS NOT,
so you begin the process of true forgiveness.

Knowing what forgiveness is not is important in the early days when
trying to grasp the reality of a spouse’s unfaithfulness. 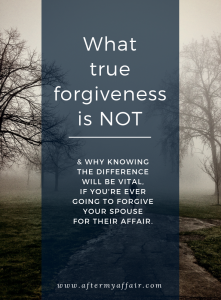 Understanding the boundaries of what forgiveness is and is not, will be an important part of your recovery process.

Forgiving someone who has wronged us is never a natural thing for us as human beings.
Our human nature is to want justice or revenge on the one who has done something against us.

How much deeper is the wound when the infraction was done by someone we love and vowed to spend our whole life with.

I believe the answer is yes, but it will depend on you, as the betrayed spouse.

First, let’s clarify what forgiveness really means.
We all understand the concept, but here are some ways the Webster dictionary defines it:

Those sound good on paper but how to live them out is another story.

There are things to keep in mind as you question whether you can forgive your spouse after they were unfaithful.

Now let’s look at what forgiveness is NOT:

1. True forgiveness is not conditional.

If you base your forgiveness on whether your spouse ends the affair or does everything right, your forgiveness level will be up and down like waves in the ocean. Besides, it would be a conditional forgiveness, which is not true forgiveness at all.   Remember our Webster definition? “To grant relief of payment..” If we wait for our spouse to get it all together before we forgive, we are still expecting payment (i.e. “I will forgive when you are worthy of forgiveness”). No, true forgiveness happens independently of the person’s actions or responses.

2. Forgiveness is not really about them, it’s about you.

Forgive, no matter what the future holds for you.   Whether your marriage survives or not, forgiveness is still important for your own healing. It is all about releasing you not your spouse. When we are in pain from a betrayal, it is easy to forget that our anger, although justified, only hurts us and holds us We become imprisoned by our anger and resentment.

The tapes of betrayal that get replayed over in our minds are the keys to our jail cell refusing to release us. As long as we replay the offense over and over in our minds, we become the prisoners of its hostility. If allowed to fester and grow, we will become people we, and others who know us, no longer recognize, and not in a good way.

3. Forgiveness does not equal trust.

Although both are important to the marriage being restored, they are separate entities and processes.
You can forgive someone before you actually trust that person again.  As Ronald Reagan was famous for saying “Trust by verify.” And that’s okay.

4. Forgiveness does not mean you condone their behavior. 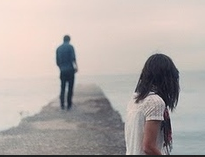 It is possible to forgive the person and not condone their behavior.  Sometimes people feel if they extend forgiveness, the other person will think they are okay with what they did.  Or, they’re afraid the other person will not understand how deeply the offense hurt them.  Of course, it is important to get those feelings out.  You cannot rush the forgiveness process.  Expressing your pain to the wayward spouse is important for healing, as long as you don’t stay stuck there. They have a debt they can never repay, it doesn’t matter how sorry they may be, the past is the past.  True forgiveness acknowledges the depth of the offense and the seriousness of the behavior, but chooses to free that one from their guilt. It doesn’t mean there aren’t consequences to the behavior, there always are consequences, but the prison sentence is ripped up instead of enforced.

5. Forgiving someone does not make you a weak person.

I’ve heard many people say they feel like they are the weak ones if they choose to forgive their spouse of their affair and that others will look down on them for it.
It is a common feeling, but remember you are doing the harder thing.

The easier way is to go with what is natural to us, and stay angry.
It doesn’t take much effort or work to accomplish that.
But the stronger soul is the one who can learn to release that spouse from the debt they can never pay.
That kind of forgiveness is a rarity today,  and something very admirable. Weak people follow the crowd.

Does that mean you allow yourself to be continuously taken advantage of and become a doormat for them to not respect?
Not at all.  Boundaries still should be set and kept.

Strong people do the hard things that are contrary to how they feel, which leads to number six.

6. Forgiveness is not a feeling.

Forgiving your spouse is a conscious decision.

You may not feel like forgiving, but forgiveness is often not about how you feel but your decision.

When our feelings are screaming at the injustice of it all, it’s hard not to follow our feelings and stay angry.
But it’s a choice you need to make, sometimes multiple times a day, and it’s not based on if they’re worthy of it (see #1). I
It’s often helpful to say: “I choose to forgive——– for how they hurt me.” Or “they may not deserve it, but I choose to forgive.”

How about you?  Are you struggling to forgive your spouse, or someone else?  Which one of these resonates with you the most about what forgiveness means and doesn’t mean.  (i.e. Trusting them or still having boundaries…)  I’d love to hear your comments and input below.