What is affair fog?

Have you heard of it? 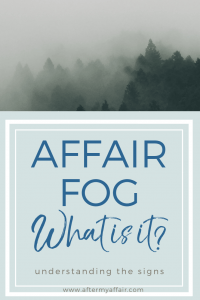 The term “affair fog” is thrown around quite a bit in affair recovery and healing circles,
and among marriage counselors who understand infidelity.

I didn’t want to assume you, my readers, really know what the heck I’m talking about, when I write about it.
So here’s my input and perspective on it, from someone (yours truly) who was in that ‘affair fog’ 12 years ago.

In this post I’ll define what is affair fog, the signs of affair fog, and answer if it affects women differently.

First, I’ll share a story from my own experience, with being in affair fog.
Then I’ll list the 5 signs to understanding what affair fog is.

All I can share is what I know personally, and have lived through.
But I also like to gather information, input and knowledge from the many unfaithful women I’ve talked to over time,
and the hundreds of affair books, and information online, that I’ve devoured.  (Yea I know that sounds weird).

Another term for affair fog is deception, and it’s a very real result of being in an affair.
I wrote another post about the deceitfulness of adultery– 6 ways to know if you’re being deceived.

My story of affair fog.

I remember throwing on some clothes, gathering up my toiletries bag and make up,
and leaving my precious 3 boys (who were 16, 13 and 8 years old at the time), and my husband behind.
I walked out on this family of mine, that I had adored and would have given anything for just months earlier.
I’m ashamed to say, the next few months I spent between my house and the other man’s.

Definitely not my most shining moments.

Just 2 months later, on Mothers Day, I met my family at Applebee’s.
But do you think I came to my senses and broke off the affair and ran home to my family for good?

But what would make me do such a very uncharacteristic thing for me?
I remember the torn feelings I had,  because I knew the affair partner was waiting for me.
Never mind that this was freaking Mother’s Day and I should be with my family and not committing adultery!

These children that I decided (joyfully) many years earlier to not pursue a career for,
so I could stay home and spend the majority of their childhood with them.

But here I was, going to be with my affair partner after a Mother’s Day lunch with my family.
The next few months are a blur now, as I was back and forth between my house and the other man.

I know I risk a lot of judgment in sharing my story  like this.  But I’m committed to being honest with you,
because I’ve been where you are.  Shame from affair fog has to leave when it’s brought out into the light.

But I share this story with you to show you, I understand the power of deception.
The slow decline of a soul, that stepped further and further away from her Lord and started believing the lies I heard whispered in my mind.

Because that’s what affair fog ultimately is… deception.

The hidden voice behind ‘affair fog’.

The lies we believe are as strong as that day in the garden of Eden with Eve.
Satan knew her weak spot. He knew he could trick her by asking ‘did God really say?’

Whether you come from faith and believe the story of Adam and Eve or not, you must admit, if you were the unfaithful spouse,
there was some version of that lie spoken to you before you fell too.

Did God really say? Don’t I have the right?

So we make justifications, and then we take the bait and get entangled in an affair that shows us no mercy.
Affair fog ‘s grip gets tighter and tighter, while we still think we’re free.
It’s the ultimate deception- to believe you are free and having fun when you’re more bound and deceived than ever before.

So let’s dive in.

1. What is “Affair Fog”? Understanding the 5 most common signs of affair fog.

Simply defined, it’s a term to describe the extreme change in behavior, thinking and even memories of a cheating spouse.
An otherwise loving and devoted spouse, becomes distant and aloof, often before the betrayed spouse knows about their affair.
This change is sometimes the catalyst that gets the affair exposed because the betrayed spouse starts suspecting is wrong.

The wayward spouse pulls away from their spouse, and often, even distancing from their own children to some degree.
They spend more and more time with their affair partner, fueling the secret life they’re developing.

Here are the most common signs of affair fog in an unfaithful spouse:

A. Their behavior drastically changes.

B. Their thinking and reasoning abilities seem to be polar opposite of who they normally are.

C. They develop a type of ‘altered memory’.

2. Why would they suddenly develop a distorted memory of their marriage?

3. Affair Fog makes no distinction between the genders.

I’ve heard of women who left their husbands and children to marry their affair partner, thinking he was her ‘soul mate’.
Only to later realize, it was all an illusion, he wasn’t as great as her mind told her he was (often women affair down by the way).

Unfortunately, for some women, it’s too late and their marriages have ended (although I believe God can still do a miracle even if divorced).
But it just illustrates the high price that comes from listening to the voice of affair fog.

I almost became one of those women.

5. The illicit nature of infidelity only fuels affair fog more.

The truth is, everything seems more intense and romantic in an affair.
But the reality is, the unfaithful spouse is just in the midst of stage 1 of love affairs, also called the Limerence stage.

Many of us have experienced this euphoric feeling of new love.
We think we never felt like this before (see #3 above, it’s the affair fog talking and rewriting history).
This Limerence stage is so closely tied to the early stages within an affair, it’s like they’re twins.

It doesn’t help that our own brain chemicals contribute to the affair fog in the unfaithful spouse.

Why women have affairs.

If you’re the betrayed husband, you can start here.

Are you a wife who’s having the affair?  Read my posts for you, here.