What Is An Emotional Affair and is it really cheating?

>Part 1: What is an emotional affair, is it really cheating?
Part 2: Warning Signs of your Emotional Unfaithfulness 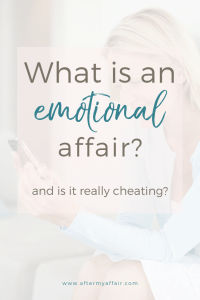 People often wonder
‘what is an emotional affair,
and is it really cheating?’

I’ll define more of what an Emotional Affair is later in this post,
but to put it simply, it’s a friendship that provides emotional support to each other, often to the exclusion of the spouse.

The unfaithful spouse confides in their emotional affair partner many details about themselves, or their marriage;
yet their spouse is often in the dark about their relationship.

Many people think since there’s nothing ‘physical’ going on, that it can’t be a true affair,
but nothing could be further than the truth.

Any relationship that becomes a secret or that you find yourself hiding from your spouse, is cause for alarm,
and usually indicates there’s some form of infidelity happening.

It starts innocently enough as a friendly conversation, 0r just a platonic friendship.
But eventually, this ‘friendship’ leads the married spouse away from their marriage and creates soul ties with this other person.
This friendship can lead into a Limerence feeling of love, which usually precipitates, or coincides with, a physical affair.

Emotional affairs, or emotional unfaithfulness, has become a hot topic,
it’s currently one of the most searched phrases under “affairs” on Pinterest.

That’s not surprising since the statistics show emotional affairs are at a record high today,
yet (likely because of the ease of connecting on social media), more people are confused on where that line should be drawn.

A national poll, according to the American Association of Marriage and Family Therapy,
found 15% of married women and 25% of married men admitted to having had sexual affairs.
An additional 20% of married couples have been affected by emotional unfaithfulness, above the statistics for physical infidelity.
More specifically, about 35 percent of wives, and 45 percent of husbands, report having emotional affairs.

In a national poll on infidelity, 60% of married adults said they’d consider it infidelity if their spouse was in an emotional relationship with someone else.
A whooping 82% said an emotional affair is still as much of an affair as a physical affair.

Fatherly.com reports more people are having emotional affairs than ever, with women leading the way.
They say results from “The Cheating Spouse” quiz (not exactly scientific but still alarming), involving 90,000 men and women,
found 91.6% of women admitted to emotional unfaithfulness, and 78.6% of men admitted to it.

I know that’s a lot of statistics thrown at you, but stay with me.

Bottom line is…
Emotional affairs may seem like an innocent way to get those needs met without actually moving onto the sexual level.
Or, this is what they tell themselves in the beginning of emotional relationships.

The gray area remains, and becomes easy to rationalize.

Still, there remains a lot of misunderstood information about what the true definition for an emotional affair, or emotional unfaithfulness, really is.
Because nothing sexual has happened, they often have a false sense of security, and it becomes easier to rationalize their relationship.

But why is there so much confusion, and gray areas, in defining what is an emotional affair?
Here’s a few questions to consider:

2. So, what is an emotional affair?

Emotional unfaithfulness can be described as having an emotionally intimate relationship with someone
(usually of the opposite sex) other than their spouse.

They haven’t recognized how easy it is to cross over from an friendship, and emotional connection, to a sexual affair.

So as this ‘friendship’ progresses, the marriage relationship suffers,
creating emotional disconnection and tension between the married couple.
That’s really where the damage starts.

I’d also add, why are you feeling the need to go to that other man with emotions and information only your husband should have?

Emotional affairs are very much like the proverbial frog in boiling water syndrome.
Of course the frog would jump out of that boiling water at the first moment of feeling the heat on his feet.
But put that frog in mild temperature water and turn up the heat slowly,
that frog will boil before he ever knew what hit him.

Terribly gross analogy, but you get the point.

We can often be seduced into the entanglements of an affair, before we even know what happened,
because we believed it was just an innocent friendship.

Many times a spouse will sense something is ‘off’ with their partner, and they may question them about their ‘friend, or co-worker’.

Emotional affairs are often also the gateway to a potential physical affair occurring.

3. How do emotional affairs begin?

There are hundreds of ways an emotional affair can begin. But lets talk about the most common ways.

A. Reconnecting with an old fling, or lost love, on facebook, linked in, instagram, twitter.
However, facebook is currently leading the list with hooking up old flames again.
Facebook has just made it easier than ever to find people you lost contact with through other friends,
and the platform makes it easy to communicate in a non-confrontational or suspecting way.

B. Developing a friendship with a co-worker, that progresses to more time spent together, including intimate conversations.

C. Church groups, Choir, or any activities through church that require more time to spend with someone of the opposite sex,
which creates opportunity for an emotional affair to take place.

E. A friendship develops with your child’s coach, or teacher, or through school groups.

Really, the list can go on and on.
I’m just listing the most common and easiest ways to slip down this dangerous slop of emotional infidelity.

You can read more of the 4 main stages of an affair here.

Emotional affairs and texting seem to go hand in hand.

Emotional affairs have become easier to partake in as messages people has also become easier through texting.
Where we used to rely on actually talking to someone on the phone or in person, now we can carry on secret conversations
with someone while in the same room as our spouse!

I wonder how many emotional affairs started, just through texting alone. It definitely makes it easier to minimize a friendship that’s gone too far.

Ultimately, the spouse who’s having the emotional affair justifies the relationship, keeping them from feeling guilt about the ‘friendship’.
When confronted with suspicions of their emotional affair,
they (or you) might respond with one of the following reasons or responses:

These are just some examples of emotional affair defenses a spouse may give, if they’re confronted about the relationship.
But there are so many of them.
Did you notice how often the ‘just friends’ words come up?
It’s not surprising, since the early stages of emotional affairs start out as friends, then often progress from there.

Whether you see these signs in yourself, or your spouse, the biggest red flag is secrecy.
Ultimately, if you’re keeping anything a secret from your spouse, there’s something wrong.

We often justify keeping secrets, because we’ve been questioned about the relationship and we don’t’ want to have to defend it,
or risk losing our friendship.

5 reasons why ending an affair is so hard.

5 signs of affair fog to watch out for.