When you’re tempted to have an affair.

You can read Part 1 here if you missed it, “18 reasons why not to have an affair” Where I listed reasons 1-8. 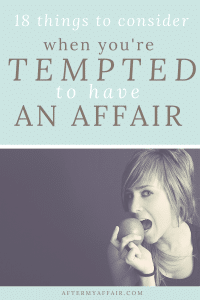 10. Prepare yourself to live in confusion, a torn heart, and inability to decide.


Even before your spouse finds out about your affair, you’ll live in confusion and feel torn apart.
Giving your heart and body to someone else, only serves to divide your soul in two.
It often causes you to be indecisive about who to spend the rest of your life with.
You may know in your heart that your affair partner is not right for you, but you’ll still feel confused and ambivalent.

That’s what affairs do.

11. You’ll  become trapped in a web, that’s hard to break free from.


Ask anyone who’s been involved in an affair and they’ll say it became a power greater than themselves to stop it.
Most will say it was harder to stop the affair than they expected.
You’ll understand this terrible hold that’ll come over you, as though invisible chains were wrapped around you.

12. You risk getting an STD, and passing that on to your spouse.


Will a potential affair partner be honest about their STD before your passionate exchange?
Even if they are, you may fool yourself into thinking it won’t affect you. This is unfair to your spouse who did not sign up for this.
Look up the various STD’s out there, then decide if you want to play Russian roulette, based on the word of your cheating affair partner.

13. Your children will be affected in many ways in the future.

If you divorce, they’ll deal with the affects of that for the rest of their lives.  Even if they eventually learn to live with it.
No child wants to live in two homes, and be shuffled between visitations and weekends with different parents.
However, even if your marriage does survive, they’ll likely take your infidelity personally, and may feel responsible somehow.


Most people come out of an affair with less than they went in with.  Affairs can be expensive, between secret dinners, hotels, jewelry, gifts.

Not to mention the loss of your standard of living, if your marriage ends in divorce.
Divorce lawyers, court fees, child support, alimony, these all cost huge amounts financially.

Costs and new financial obligations can easily add up, leaving you in a much lower standard of living than you are in now.
Also consider, could you get fired from your current job, or kicked out of the military?  That’s a real possibility for some people.

15. At some point the fog will lift, and you’ll see what you really signed up for.


As in #1, there’s an illusion, called affair fog, when you’re in an affair.  The fog changes the reasoning, and behaviors, of otherwise rational adults.
People in affairs start doing things they’d thought possible before.   Yet, eventually, the fantasy lifts and lies you believed about the affair being fun, come crashing down. After you begin seeing this other person for who they really are, your life will likely not be the same.  You’ll see you’ve only exchanged the faults of one person (your spouse), for another (the affair partner).

Tying into #15, you’ll likely learn that friendships you counted on for years, dissolve quickly after they learn of your affair.
Even friends that you’ve sacrificed a lot for, and helped out in the past, may not continue the friendship.
Church friendships, or acquaintances, will be affected. Leadership roles you had at the church will be eliminated.

Some people can’t get past their disappointment.
Seeing you fall from grace may take more maturity, and mercy, than they’re able to give. It’s a sad fact but true.  I lived it.

17. Your faith and relationship with God will be affected.

Perhaps you don’t share my Christian faith. But if you do, you can count on your walk with God changing.
Yes, God loves us and forgives, but it still takes a long time for us to feel that closeness again.
His mercies are new every morning and when we come to Him with true godly sorrow, He forgives us.
But our hearts had to become hardened along the way, and this hurts our soul as a believer.

Also, being forgiven doesn’t negate the consequences we must face as a result of our actions.
Just as a criminal must still face jail time, even though he may have repented of his actions.

18. You’ll always look back on this affair with regret.


You may tell yourself that it’s real love, but you’ll likely regret this decision for the rest of your life.
Affairs promise so much, but leave behind so much destruction.  We can’t make a deal with the devil and play by his terms, and not suffer consequences.
I know we think we’re the exception, or this person is “so wonderful”, but that’s the first stage of Limerence talking… and deception.
Our current actions, affect our futures.

Nobody ever says, “I really wish I had an affair”.
But I can tell you of many people who say they wish they hadn’t. Knowing an affair would top most peoples list of regrets, why even enter into it? 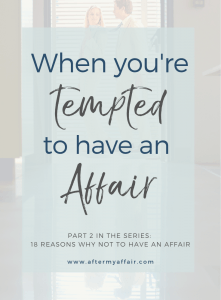 Although this list could likely go on and one, you get the idea.

Even though your list may look a little different than mine, the truth is, the consequences are always more than we think they’ll be.
When you’re tempted to have an affair, it’s easy to downplay the effects our actions will have on others and on our life.

Infidelity has a track record of leaving people brokenhearted, and relationships destroyed in its wake.

I sincerely hope my words of warning will cause you to reconsider starting an affair.

I hope you won’t have to learn the hard way. But you may have already made up your mind to have an affair.
There’s nobody on this earth who can keep you from doing something, you’ve determined to do already.

Affairs are like tornadoes, they blow in quickly in a whirlwind of power
and then they’re over leaving everything and everyone destroyed in its path.

The tornadoes of affairs have no mercy on who or what it destroys.

Nobody escapes the destruction.

To the christian woman who had an affair.

the 7 ” benefits “of having an affair- which are not benefits.