6 top reasons why women have affairs. 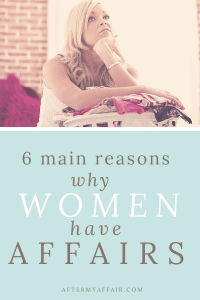 More women are having affairs than ever before.

It’s easy to ask ourselves why do women affairs, as it seems to be more common these days.
Infidelity is passed off as normal on TV, in movies, and even for many of personally.
Most people either know a couple who went through an affair or have experienced the pain of an affair themselves.

Statistics show the number of women having affairs is climbing.
The journal of marital and family therapy reports 22% of married men have admitted to having an affair and
15% of married women have also admitted to infidelity.

However, in the last two decades, the numbers of married women who have had an affair spiked to 40%
(according to National Opinion Research Center).
Unbelievably, 74% of men and 68% of women say they would have an affair if they knew they wouldn’t get caught.

Yet, statistics don’t do much good when it’s your marriage torn apart by an affair.
Whether you were the wife who strayed into the arms of another man,
or you’re the betrayed husband who found out your wife was unfaithful,
the effects are devastating.

Every woman is different and so every affair gets started for different reasons.
Yet, listed below are the top reasons women have given for why they strayed into infidelity.

1. Discontentment in their lives.  |

Either with themselves or their marriages or both.
They could feel discontent with how their lives are going, or disappointed if they expected more.
In the age of social media and comparisons, it’s more tempting than ever to feel discontent about our lives.

Besides, will people really put pictures of their screaming kids and messy houses on facebook? Um, yea..no.
Social media can be great, but it also can be a trap for discontentment and comparison.
But I’m sure you already knew about that struggle.

Many women have so many demands upon them between kids, maintaining a household, family, work and their marriages.
Sometimes it becomes too much responsibility along with boredom at the routing.
Most women go through phases of needing an escape from the monotony and demands of their life.
This is especially prevalent in that midlife age range 30’s-late 40’s when her responsibilities are at an all time high.

This goes closely alongside #1 but boredom is different in that there’s nothing exciting to look forward to each day.

3. She feels unattractive and seeks validation that she’s still desirable and attractive.

Lacking excitement and romantic passion in their lives.
More middle-age women are seeking passion and sex as their reason for an affair.
Yet, it often has little to do with sex and more to do with needing to feel desirable and for the emotional connection.
Contrary to what society would believe, even women in happy marriages, cheat because
they’re looking for passion. (source: American Sociological Assoc./(www.asanet.org) 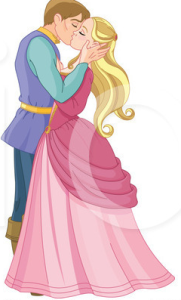 4. Unhappy in their marriage.

Their unhappiness can stem from a lack of communication, affection, or just feeling disconnected from their husband.
Sometimes we go into marriage with a fantasy idea of what it will be.
But nobody can sustain the early feelings of a relationship, that limerence stage that affairs start in.
That’s why affairs are so alluring, they are void of any normal responsibilities of a married couple face.

Yet, on the flip side, there is a tenderness and security in mature love.
Love that has weathered the storms of life and there still is a sweetness there.
Affairs rob married couples of that joy by being tempted by forbidden fruit elsewhere.

Only when you get there, you realize it was a rotten apple.

Desiring to live out a fantasy life with no responsibilities and demands upon them, believing a new prince charming will make them happier.
Sometimes the roles of mommy and wife can get demanding and many women see no way out of the stress and responsibilities placed upon them.
Having an affair may give them the temporary escape to live a careful fantasy world.

These women have likely played the family role of good girl all their lives,  and they’re tired of pursuing their perfectionist lifestyle.
They may often be the one in the family that everyone looks to for support and stability.
When they realize how exhausting it is to maintain that role, some may quietly (or not) rebel.
They begin choosing a lifestyle or habit that is the complete opposite of their values just to escape the pressure.

Obviously not everyone who filled that family role of “hero” will turn away and rebel.
But as we get older, our needs change and we often don’t fit into the roles we filled in our families of origin.
Do a study on ‘family roles’, it’s enlightening.

6. Switching from one addiction to another, commonly known as substitute addictions in recovery.

This one is not so common, but it’s a reality for some, so I’m listing it.
This often happens to someone who’s trying to overcome one addiction and it seems they have mastered it sometimes.
But what’s actually happened is they’ve only substituted the first addiction for another.

If the source of their first addiction (or habit or behavior) wasn’t dealt with, there’s a temptation to find another to fill it’s place.
It’s our subconscious way of dealing with the triggers and stress of life.

It is well known that an affair can easily become an addiction with all the characteristics that comprise an addiction.
I related to this one on some level.  Be aware, you’re vulnerability is high for an affair when you’re giving up a substance, behavior or other relationship
that you’ve used to alter or numb your mood.  I wasn’t aware of this, and wish I was.

In Conclusion, no matter her reasons; her affair began with her believing a lie. They all do.

Ultimately, every woman who’s had an affair, has believed a lie on some level.  That may sound harsh, but it’s the truth.
If you’re that woman, that lie was a conscious thought in the forefront of your thinking, or it was subconsciously believed.

Maybe you’ve started believing that having an affair will fill some void in your life, you’ll feel desirable, excited or powerful in some way.

However, the lie will eventually be exposed for what it is. They always do.


After all, can one person really fulfill all those demands and requirements?  That’s a lot to place on another human being.

Especially since at one time, we all believed our husband could fill all those needs too.

The truth is, no human being can fulfill all the needs we have as women.
There’s no affair that will make you prettier, wiser, younger, more fulfilled, less stressed and more happy.

Women in affairs eventually discover that those assumptions are short lived, the secret comes out and the lies are exposed.
Most women who had an affair soon find out the consequences are much costlier than they ever bargained for.

What about you?  Can you relate to this article?  What is the one that resonates with you the most?
You can comment below.

If you are a husband that found out about your wife’s infidelity, you’re likely looking for some answers.
Understanding why your wife has had an affair is important for many men.
These could apply to your wife or your wife’s reasons could be different.  But these are the most common.
Read this post written just for betrayed husbands to help you sort it out.

To read about the various stages of an affair, click here.

« Stage 4-How to rebuild your marriage after an affair
Should I marry my affair partner? »