If you’ve been in your affair for any length of time,
you’ve likely asked yourself this question.

(even if just in your own head)

Here are 5 crucial points to consider.

Unless you’re in this affair for a one night stand, or an easy fling, 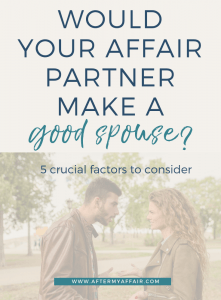 this question will eventually come into your mind….is person marriage material?

At some point in my own affair, I had to wonder whether the affair partner would make a good enough husband to me,
if my marriage ended in divorce.  (But honestly, I knew in my heart it would be hard to compare).
Because what was the purpose of all this, if we didn’t end up being married one day?

Was I becoming reduced to having a fling? Or, did I want this thing to survive in real life?
I had to eventually ask myself those things and my answers were eye opening for me.

This is what I discovered from my own infidelity experience.

1.  Affairs are unsustainable for real life and unlikely to endure.

Read what Dr. Frank Pittman says, (he’s the author of Private Lies: Infidelity and the Betrayal of Intimacy).
“The probability of affairs ending in marriages is not very high — between three and five percent.
While fewer than 25 percent of cheaters leave a marriage for an affair partner, according to one source,
most of those relationships are statistically extremely unlikely to endure.”

It makes sense since the relationship started under the alliance of lies and secrecy.

Will her affair partner be a good step-father to her children?
The reality is that in most affairs, they haven’t really focused on the children or the children’s needs during the affair.
It has been mostly about them and their own feelings and desires, whenever they’ve been together.

Remember that most relationships start out seeing only the best side of someone.

Your future, and the future of your family, is dependent on you asking the hard questions now.

Most women honestly don’t want to notice any faults because her lover is fulfilling her most important needs.
Plus, most people want others to see only their best side.

There’s also a real phenomenon called “affair fog”, that occurs to affair partners acting out in the affair.  They begin to lose sense of
reality and can only see their AP through ‘rose colored glasses’ and begin rewriting their marriage history of happiness.
You can read what affair fog is not.  And what affair fog is, and understand the signs.

2. There are no bills to pay or dirty diapers to change in affair fantasy land.

Affairs also exist in a type of fantasy world. This is a world of no worries about bills that need paying, dinners that need making or screaming kids wanting attention.
No one really grocery shops after a long day at work in Affair Fantasyland.
Affairs don’t usually include the daily routine of laundry and responsibilities.
An affair partner doesn’t have to stay up late with sick kids who are throwing up from the flu.

They get to go home at night after the fling with you is over.
That’s part of the allure of an affair though.  There are no real world demands and responsibilities.

They can be the hero that brings flowers and love notes and have all the positive sides of a relationship,
without any of the difficulties that real world marriages go through.

On the contrary, real life is hard. 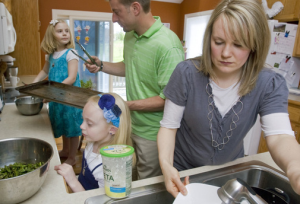 Real life husbands are there when their wives need a break from the kids, and encourage her to pursue her hobbies and girlfriends.

Real life husbands are responsible and help support the family financially,
even if they were out of work, their wives know they care and they’re hard workers.

Good husbands show up when it’s not easy and fun to be a Dad and a husband. and they try harder next time when they mess up.

Most good husbands help their wives when they’re sick in bed,  and they seek to serve her.
They still love her even when she doesn’t look so great in the morning without makeup,
or when she gained a little weight since their wedding day.

It’s ugly and hard, and not neatly wrapped in a pretty little bow; ready and able to show it’s best side.

Maybe you’re husband is not all those things I listed a real life or good husband to be.
Maybe that’s part of why you strayed.  That’s hard and you have real needs that need attention.
But remember that no man is perfect, and we all have our flaws, you’re probably not seeing your affair partner’s faults yet.
Also, it’s a whole lot easier to water your own lawn, than to leave it for other greener grass.  ”
You’ll likely find out later it’s just artificial turf.

3. Infidelity always shows its best side.

It’s there with heels on and lipstick.  The romance is always alive and the passion is hot.
It doesn’t require much because it knows it doesn’t fully have you.
You’re not all in because you have a family at home waiting for you.
So for now, you can feel young and pretty for a little while.
It’s easier to pretend it’s everything you needed in life; that this lover is your soul-mate.

But it’s not based on reality.  It’s based on a lie, and a lie is still a lie no matter how many times you’ve told yourself it’s all real.

Early in an affair, most of us women see what we wanted to see in our affair partners.  It’s normal.

Do you think that can be true with you?
As time goes on, and the affair progresses into some real life situations, many women may begin to see
more and more weaknesses in her lover that she didn’t notice before. 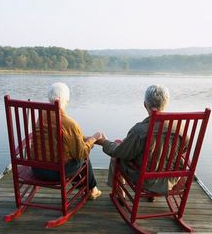 Ask yourself, friend, years from now when you’re old and gray,
who will you want on that rocking chair by your side?

Be very honest with yourself.  These questions are only for you to reflect on.

Do you really know enough of this man that you’ve had such a passionate affair with?
What is the depth of his character and his soul?
Has he been married before?  What were the issues in his other marriage and were they addressed?

Many people take those problems into their new marriage.

Maybe right now, you just can’t make a decision to either end the affair or end the marriage…
You might be interested in reading about ending an affair when you’re ambivalent.

4.  Many affair partners believe they love each other and are “soul mates”.
Is that will make him a good husband?

Really?  I would guess she also had that same idea when she married her husband.

Being ‘ in love’ does not make a good marriage that will last.  Otherwise the divorce rate wouldn’t be at 50% now.

The “love” they feel is probably the type of love that is real and powerful and passionate…and unfortunately not sustainable for the long haul.
It’s the first stage every love relationship goes through, it’s called Limerence.
Read this post to learn more of the 16 signs you’re in ‘Limerence Love’.
Every marriage goes through cycles or stages of love.

Sure it’s easy in the beginning to feel in love with someone else,
but what about the 3rd stage of love when disillusionment sets in?

Or when they don’t seem like who they once were?

What’s important for every woman in an affair to understand, the chemical reaction occurring in her brain.

There’s a release of dopamine and oxytocin, when she’s with her lover.

This is similar to the reaction an addict has to a substance they are addicted to, or the feeling of excitement a gambler feels when he enters a casino.
This reaction makes it much harder to simply break off the affair without taking drastic steps.

This makes it much harder to simply break off the affair without taking drastic steps.

This does not equal the selfless, sacrificing type of sustainable love.
Until she faces that reality, she risks losing her marriage and ending up with nothing.
Learn more about the common signs of affair fog here.

I heard that statement many times from various counselors and friends, and I didn’t want to listen to it.
I thought “well, I’m also a cheater in that scenario, so who am I to say that about him?”
That may be true but it’s still a question every woman in an affair needs to ask themselves.

What is the character and moral compass of the man you’re in an affair with?

Many affair partners will eventually cheat on their lover, and it is usually a big wake up call for most women when she discovers it.
But should we really be surprised?

Personal story:  I discovered there were other women on dating internet sites that my AP was establishing relationships with.  |
Many men in affairs are out for themselves, and the thought of ‘being left with nobody’ will cause them to have a few on standby,
should their main lover not leave her husband and family.
It’s actually pretty common.


Yet that shouldn’t be too surprising.

If a man is willing to have an affair with you, wouldn’t he also be willing to cheat on you later?
We like to tell ourselves that we are different and he would never cheat on us, but what does it say about his integrity if he is willing to help you lie to your current spouse?
Even if he is not married, does he really have integrity to encourage you to lie?
Is this man really ‘so great’ if he is willing to put his own wants and needs above that of splitting apart a family and breaking the hearts of children in that family?

If you married this person, would it be in the back of your mind that he could possibly cheat on you one day?

As I stated earlier, Do you want a marriage that began on a foundation of lies, secrets and sneaking around?
Marriage is hard enough these days but throwing those qualities in the mix, make it even harder.

Leave a comment and let me know what you think.

Married but in love with someone else.

11 lies you might believe that sabotage affair break up.

Are you microcheating? here’s 11 signs of it.

How to end an affair for good.

warning signs you might be having an emotional affair.

« Should I marry my affair partner?
How an affair is like a shiny new car »